Tioga is the Iroquois Indian name for Peaceful Valley, descriptive of this area as well as the Tioga area in the state of New York.

In the early part of the summer of 1887, the Great Northern Railroad spur from Minot was extended in the eastern Williams County, but it was not until homesteaders from Tioga County, New York, settled here in 1902 and organized the township, giving it the name of Tioga. N. W. Simon and W. H. Dixon and others bought lots from Nick Comford who owned some of the town sites along the Great Northern Railroad. It has been told that Comford had purchased this land from U. S. soldiers who had received it for their services.

White Earth, a town about six miles east was booming at this time. The railroad had already been built to that point, so the immigrant cars were loaded 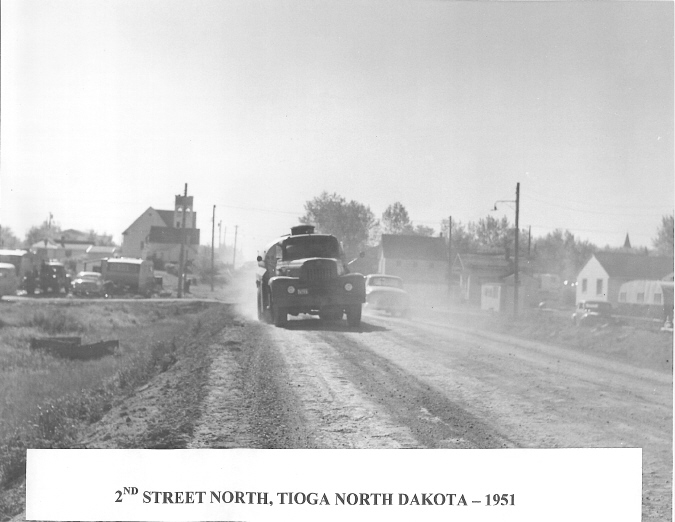 there and goods and cattle were hauled or trailed to the homesteads.

The section house was one of the first buildings in Tioga. The first section laborers were nearly all Japanese. John McMahon was probably one of the first white people to work on the section crew. It was he who planted the trees that we see in downtown Tioga today. "Shorty" Hachig Melichan also helped in making Tioga's history. He, too, was a section laborer and continued to make Tioga his home.

The first store was built in 1902, by N. W. Simon, for general merchandise and groceries. It also held the first Post Office. Mr. Simon was the postmaster. The first barber shop was also in the store building, which was a two story structure. One half of the second floor was used for living quarters for Mr. Simon and his family and the other 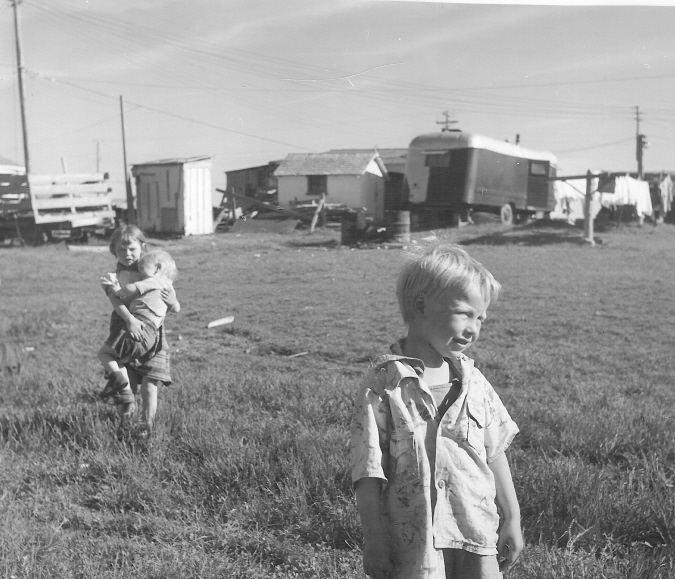 Dr. Robert Stobie came in 1906 and was the first doctor. He took care of patients in his home and also traveled many miles to help the sick.

Tragedy struck Tioga in 1907. A fire broke out in the hardware store and all the building on the west side of the street were destroyed with the exception of the Simon Store. That burned 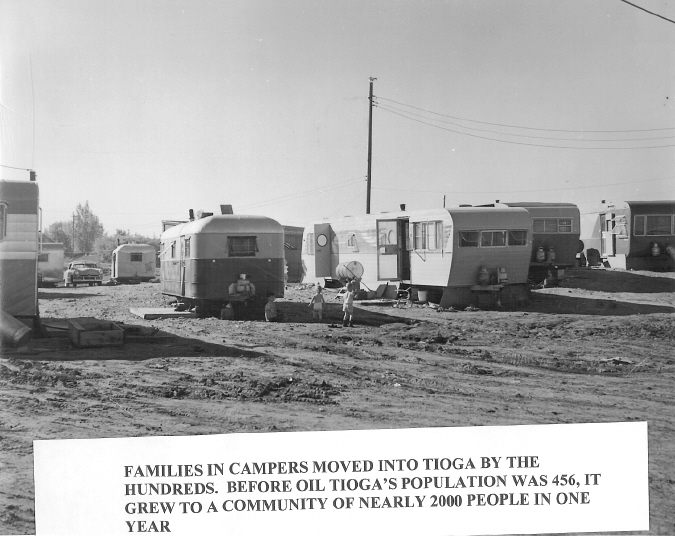 in 1925 and the present building was completed in 1926. The other buildings were reconstructed and it was not too long until the business section of the town was again operating.

Tioga's first bank was the Tioga State Bank, established in 1904. The Tioga Telephone Company was organized in 1907 by a group of business men and farmers. Tioga also had its own electric company. This system was an automatically controlled plant receiving energy from a 25 horse power kerosene engine running a 16 kilowatt generator which produced a direct current ranging between 110 and 130 volts. 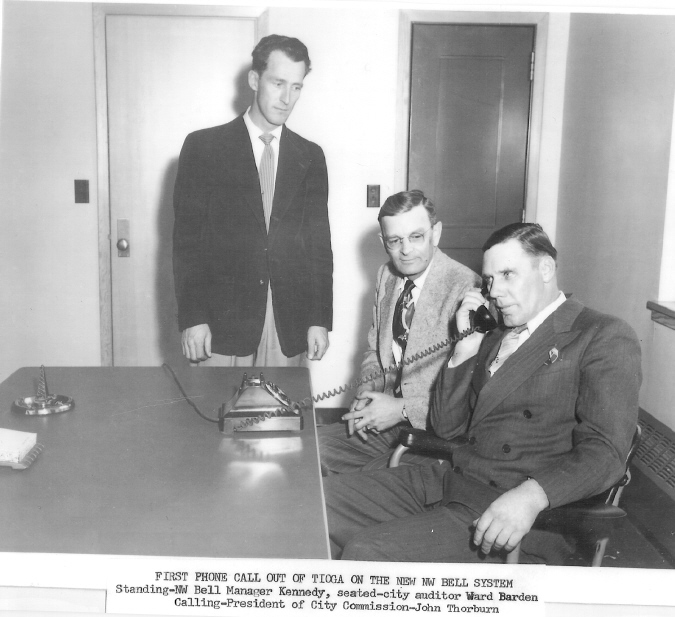 one time, Tioga was the largest primary grain market in the world, much of it from McKenzie County. Farmers crossed the Missouri River on the Walter's Ferry, reaching Tioga the second day, unloading and leaving for home early the next day.

During the early years, people proved up their homestead, married and raised families. During the depression of the 30s, many families lost their land and property, so left Tioga to seek easier living. Those that stuck it out here encountered many hardships, but with the help of relief and W. P. A. work available, families 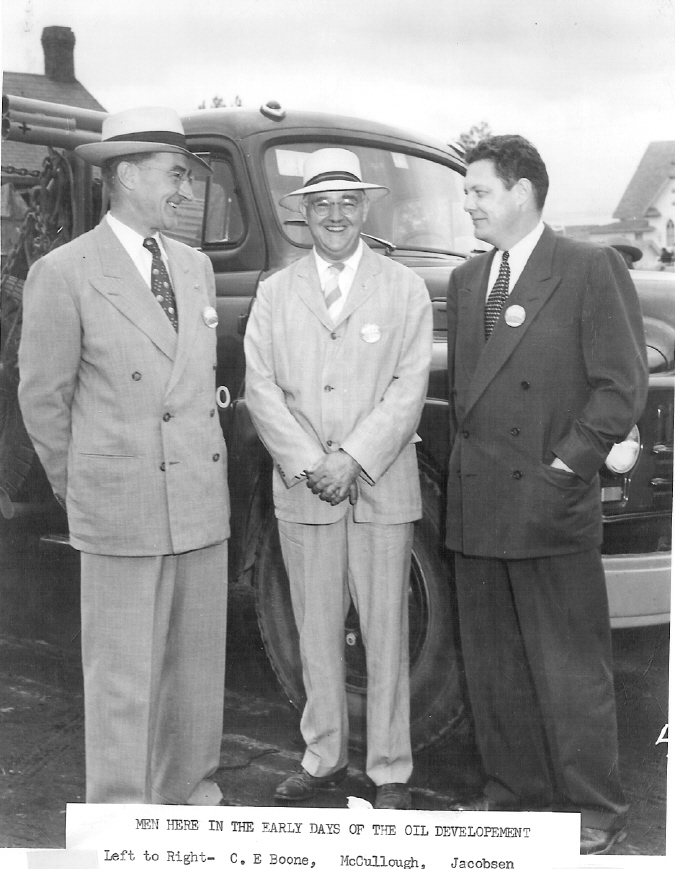 were able to survive. No one felt embarrassed to accept this help since everyone was in the same predicament. Commodities were also handed out, such as fruit, canned vegetables and meats. Mattresses and quilts were also made by local people and given to the needy. Tioga was the center for which this work was done. Farmers put up Russian thistles which grew plentifully in the dry years.

The years of the 30s passed and with the 40s also came the rain and crops were growing again. Radios, electricity and telephones were some of the new improvements in the rural areas around Tioga.

On April 4, 1951, the Amerada Petroleum Corporation discovered oil on the Clarence Iverson farm. The oil came from the Nesson Anticline, a geological formation that is part of the Williston Basin. The discovery in 1951 set off 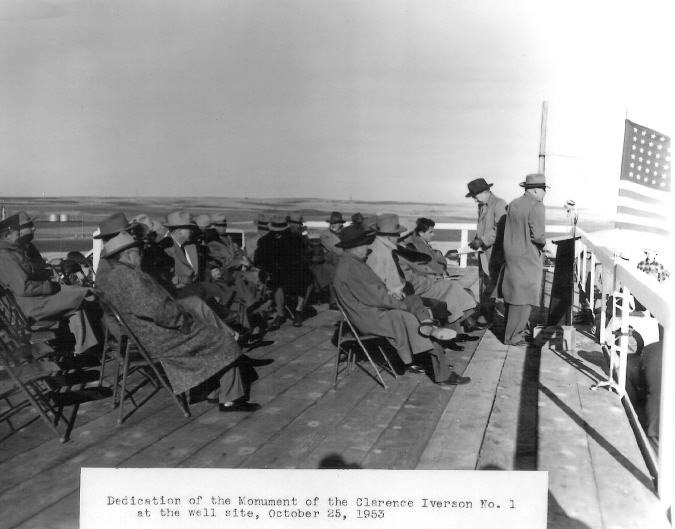 an oil boom. Oil men, speculators, brokers, and laborers flooded into Tioga, crowding into available living quarters, overburdening schools and community facilities and creating a host of new businesses. The drilling peak was in 1966 with 27,000,000 barrels coming from 1,965 producing wells.

At the time oil was discovered, Tioga had a population of about 500 and by 1959 the population was 2700. Today, Tioga has a population of about 2200. We are proud of our city with fine modern schools, paved streets, beautiful hospital and nursing home, good fire fighting and rescue equipment, lovely park, swimming pool, airport and all the other ingredients needed for comfortable living. Tioga has become a beautiful, bustling metropolis on the plains.